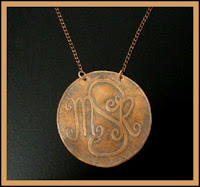 My friend Trice, who sews and will monogram anything that isn’t nailed down (and does a great job), sent me this picture and asked if I could make her one.  I could tell it is a copper pendant, most likely etched.  In theory I can do copper etching, and I have the bookmarked web pages to prove it, but in reality I had never tried it.  Most of my customers want this type of look in silver, so I normally use PMC with a custom texture sheet.  (Note to self: write a tutorial for that.)

I wanted to try salt water etching because I aim to be The Lazy Etcher, so I’d prefer to just pour the solution in the sink when I’m finished and “chase it down with plenty of water,” as my organic chem professor used to say.  I dragged my husband, whom I met in that o-chem lab, to Radio Shack to obtain a single D cell battery holder and a couple of alligator clips.  I noted that The Shack also carries ferric chloride in case this method didn’t work.  (Ferric chloride just needs baking soda to neutralize it anyway, not that bad.)  I also noted the irony that it’s usually the husband dragging the wife to Radio Shack.  Thank you for not being an electronics geek, sweetie.

Which of these does not belong? 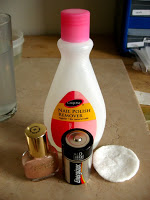 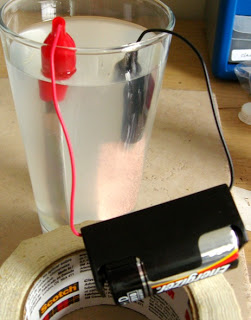 Well, they all do in this case.  After sanding a piece of 24ga copper with steel wool I cleaned it with acetone (okay, nail polish remover), then alcohol.  I freehanded the monogram with a Sharpie, which didn’t look awesome but this was just a test run anyway.  I put a spot of nail polish in the margin to note the difference in masking quality.  I wrapped the back and edges of the copper in duct tape to keep them from being eaten away, then I cut another piece of copper to be the cathode.  A spoonful of salt, a glass of warm water, and some wirework skills to attach the clips to the leads on the battery.  Clippy clippy, dunk dunk, battery in, and I was in business.  Bubbles started forming on the cathode, which was a good sign.  After about 10 minutes brown sludge appeared around the anode side (another good sign).  After 20 minutes I still wasn’t seeing much etching going on, so I added more salt. 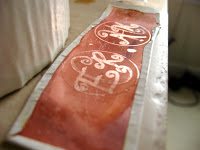